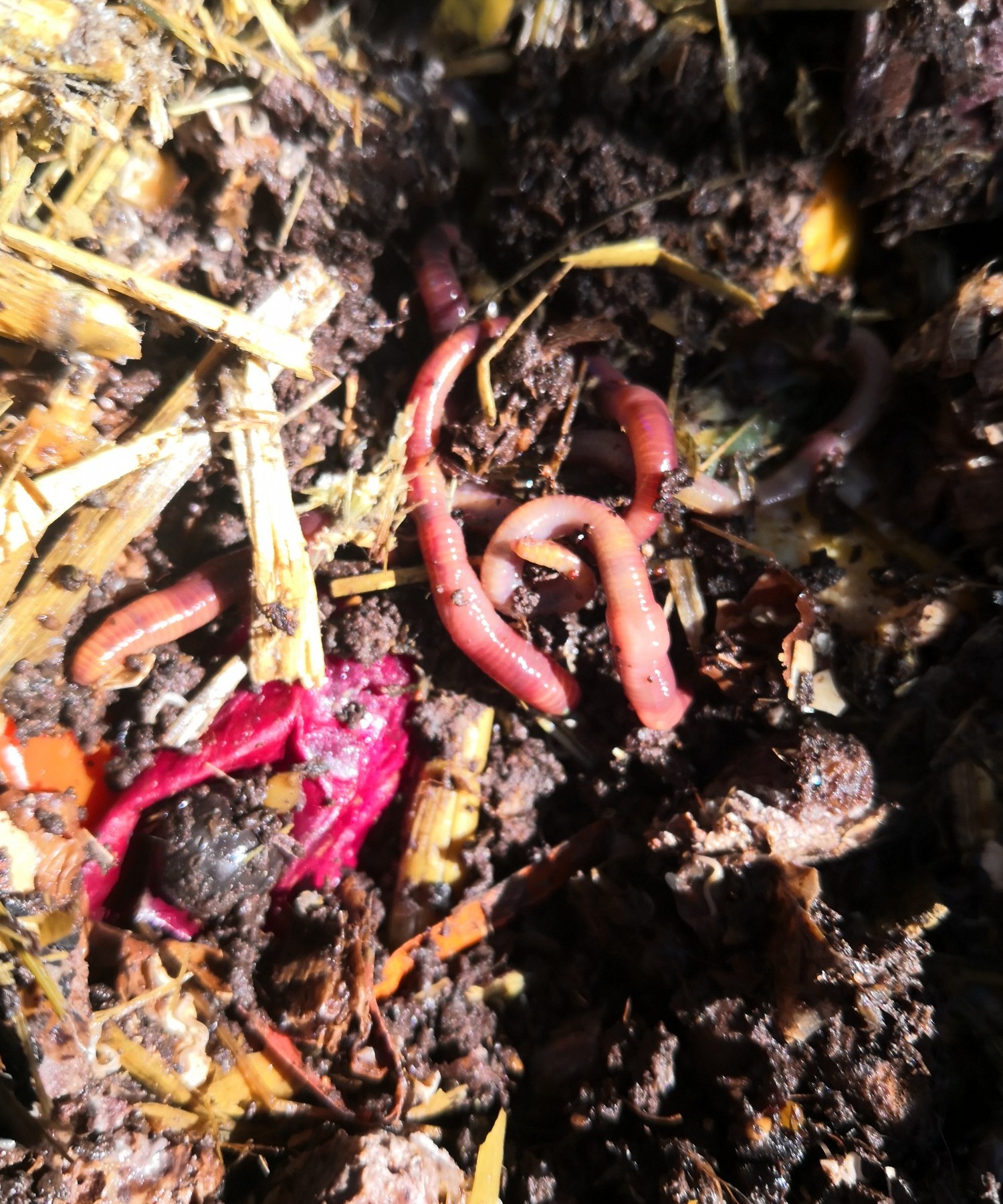 Eisenia fetida, otherwise known as Tiger Worm or Red Wrigglers are just about the best composting buddies a fellow can have. They work tirelessly, day and night, helping to break down our veggie scraps and green waste into castings and liquids that are second to (almost) none in terms of adding nutrients to soils and grow media. I’ve got so much respect for them that I always write ‘Worms’ with a capital ‘W’!

Red Wrigglers are undemanding critters, they like to be in a dark, moist place with a fairly constant temperature and a continuous supply of food. Don’t we all!

Worms have the joy of living in their food. They pass through it again and again, eating the decaying material and bacteria and fungi that colonize it. As they do so, they pass out liquid and solid material (known as ‘castings’) which is pure gold in terms of giving the garden a boost.

The liquid that drains from your worm farm has been given the nickname of ‘worm wee’. It’s not wee from them the worms at all, it is the liquid produced from the breakdown of the vegetable material in their food. Along with moisture in the bed, it leaches out of the bed and drains into the collection area.

This leachate (as it is properly called) is teeming with bacteria, which is a good thing for your garden but some of those bacteria aren’t great for human health. Certainly use it on your garden but don’t use on your leafy greens and things that you’re going to eat soon. It is best added to your compost heap or watered down and used around your perennials.

Tips for keeping happy worms – in no particular order

A Worm farm is a living ecosystem of which you are a part. You’re the main energy supplier for the system, clean up crew and general supervisor. If you follow these tips, you will be part of a healthy, happy system.

A note about feeding –

Chop the food into pieces that are as small as is reasonable. The smaller the pieces of food, the quicker they are broken down by the bacteria in the Worm farm and the quicker the Worms can eat them. Put their food in a blender if you want, they won’t mind at all! One other option is to freeze the food. Freezing causes the water in the cells of the vegetables that you’re going to feed your Worms to expand, breaking the cell walls and giving everyone concerned better access to all the goodness once things thaw.

Worm reproduction is an interesting thing. It’s not what you would expect.

Worms are hermaphrodites, so get the best of both worlds. You can identify active breeders by their distinctive white band which is called a ‘clitella band’. This forms near the worm’s head end when the worm is around 4 to 6 weeks old Worms start laying eggs in cocoons when they are 2 or 3 months old.

To make a cocoon, a worm begins to form a ring around the outside of its body. The ring is made of the mucus secreted by the clitellum gland which where some of the reproductive organs of mature red wigglers are located.

When worms join to mate, line up their heads attach themselves together at the clitella band. There they exchange sperm and begin to create a mucus ring around the clitellum. When they have finished, the mucus ring begins to dry and the worm scoots backward out of it. As the worm slides out, seminal fluid, ovum, and amniotic fluid are drawn into the small capsule. The new capsule hardens and dries as it comes off the worms head, becoming the coccoon.

In a healthy worm farm, you’ll findots of tiny, lemon-shaped, 3-4 mm long capsules scattered throughout the worm bin are worm cocoons and are often mistaken for eggs. The eggs are actually inside these coccoons. The capsules start off yellow but darken with age. The coccoons hold up to 20 eggs which take approximately 23 days to hatch.

What turns worms on and gets them in the mood for love? Soft food. You might see lots of worms canoodling together in areas of squishy soft food such as Mango or Watermmelon. The texture of the food seems to put them in the mood. You can trick them by blending food into a thick smoothie before you add it to the worm farm. Puddle this in one corner and stand back while the worms get it on.

The main problems are…

Worms have no choice but to move away from sources of discomfort. They live in their food and sense their surroundings through their skin. Areas that are too extreme in many ways will cause the worms to migrate away.

They will also migrate to the upper surfaces of the worm farm when the air pressure drops just before it rains. This is nature’s way of keeping worms from drowning when the soil gets drenched. The lower air pressure causes them to move up out of the soil or compost.

However, worms like to move around, going on little worm forays to check out the surrounding area. If you have a few of them on near the lid, as in the picture above, they are probably not escaping, just wandering around. Don’t worry if you see this from time to time.

There can be several causes of a worm farm smelling. Too much food that’s just rotting on the surface is the main culprit. Too much moisture is the next in order. This allows anaerobic digestion to occur which can be nasty. Third is, maybe…sadly…your worms are dead. This happens, so check regularly just under the food layer for lots of red, wriggly, happy critters.

Remember, first, that a worm farm is an ecosystem of its own, with producers, grazers, predators, fungi and bacteria. In balance, they don’t cause a problem, but its when any of them occur in huge numbers that there is an issue.

Mould isn’t bad in small amounts. You’ll find it on pieces of bread or pastry that hasn’t broken down. The solution is to reduce the size and amount of breadstuffs you add to the bed and bury the bread completely.

Poor sealing of the bed is usually the cause. Slugs like to live in the same conditions, so will often be found breeding happily in your worm farm too.

Little red crawling dots that are related to spiders and can attach themselves as parasites to your worms. These are attracted by acidic conditions. A little dolomite will help here.

These aren’t usually a problem but can be unsightly in large numbers. They are attracted by uneaten food, especially if it is acidic (like fruit). To prevent them, cover food with a layer of your carbon rich material to hide the odour and provide a temporary physical barrier.

These are a problem and point to too much food lying around.

They can be seen all the time, but don’t usually cause a problem. They are called Entrachydids. They indicate acidic conditions.

Ants are the supreme opportunists. They will invade a worm farm at the first opportunity. Too much food, or using feeding meat or fish to the worms is usually the cause.

Not usually a problem unless they’re in plague numbers. They’re detritivores so eat the same food as the worms. They’re always around in a worm farm but I’ve noticed that they actually breed there when the bedding material is dry. Then you will find lots of babies if you disturb the castings.

Spiders show us that there is a thriving ecosystem with lots of prey. They indicate that there is a lot going on on the surface of the bed. This isn’t always a great thing as the worms do their thing in or just below the surface.

Soldier Fly Larvae can move into your Worm farm when conditions are right and help out with breaking down excess food (some ay that they are better at it than worms). I’ve only noticed them when the beds are wet (not just a little moist but wet). Like Worms, they are amazing composters and Worms will actually eat BSF poo too. They’re not the prettiest of creatures, so if they’re appearance frightens you, feed them to tour chooks. They will love you for it in ways that only chickens can.

There is actually a plus side to most of the pests that you will find in a worm farm – chooks love them. Incorporate your chooks into your worm ecosystem as the top predators (of course, feed them outside of the worm farm…they love to eat worms just a little too much).