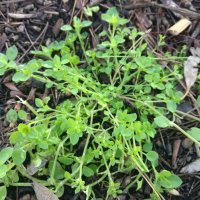 Portulacaria afra is a plant found in many gardens. It’s hard to kill and asks so little that we take it for granted as an ornamental.

It goes by many names in many places, often named the same as other plants, so it gets a bit mixed. I’ve heard it called ‘Money tree’, ‘Fortune plant’ , ‘Jade plant’ , ‘Pig plant’ , ‘Porkbush’ or just ‘that thing by the gate’,

We got our two many years ago because it is supposed to bring money to homes who have it by the entrance. We got two, just to make sure. Maybe they need to be bigger before the money comes…

Anyway, I’m posting about it because a lot of folks don’t know that it’s edible. The thick, green leaves have a lemon like taste and bite. They are cooling and refreshing and remind me a lot of Purslane (Portulaca oleracea) in their consistency and ability to turn to mucus in the mouth.

I wouldn’t eat too many, but they’re not bad on a salad.

As I mentioned, Money trees (that’s what we call it) are pretty well indestructible. Like most succulents, they strike easily from a broken off branch, go long periods without water without batting an eyelid, they’re fire retardant and thrive in the ground or in a pot. The only thing they request is a bit of sunlight, as they grow a bit spindly without it. However, branches and small plants are often used as indoor plants.

There, an indestructible succulent that is all around us but I bet you didn’t know you could eat it!

2 thoughts on “The Money Tree…a plant with many names”